‘If you don’t like my film, I’m sorry’ Jean Cocteau announces with admirable candor at the end of Le Testament d’Orphee; if only all directors were so blunt. But then again, Jean Cocteau is hardly your average hack; the French poet and surrealist was one of the greatest artistic figures of the 20th century, with film only one of the media he conquered, and this 1961 semi-autobiographical fantasy is something of a curiosity. In today’s world, where sequels often appears decades later, Cocteau’s decision to revisit his 1950’s opus Orphee makes some sense, but it’s only one of a number of angles the artist is working here. Fans of the original were not wowed by Le Testament d’Orphee, but freed from the burden of expectation that goes with sequelitis, there’s a lot going on. Cocteau casts himself as a time-travelling courtier, zapping back and forward through his own life to invent cigarettes so that he can smoke them, and to identify who he really is. ‘I take off my body to reveal my soul’ says Cocteau, attempting to make peace with himself as an artist ‘Aren’t you a pheonixologist?’ he asks himself, hoping for some revival, but his distaste is revealed when he meets and avoids himself coming down a street; ‘I thought when I changed castles, I’d change ghosts’ he laments in a brilliant turn of phrase.  There’s a melange of fashionable names dragged into the phantasmagorical action, from Yul Brynner to Charles Aznavour, and even through subtitles, Cocteau’s knack with words is arresting; cinema, he imagines, is the art of bringing ‘dead acts to life’, and the whole process adds up to a ‘macabre masquerade’. This neglected film is a fitting tribute by a great artist to himself; there’s flashes of magic and genuine insight that make it well worth exhuming, particularly with the helpful mini-features that are included on this 2019 DVD re-release.

Largely forgotten and hard to trace, Terence Young’s 1966 television film to promote the UN’s work is a real oddity; reuniting the director of the original James Bond films with the author Ian Fleming, who provided the outline here, The Poppy Is Also A Flower features an all-star cast in a thriller about stopping the opium epidemic from spreading. Executive produced by Euan Lloyd, best known for his gung-ho action (Who Dares Wins, The Wild Geese), Young’s film is packed with talent, with Terence Howard and EG Marshall the unlikely duo at the centre of the commotion. The ads promised blazing action, but apart from a couple of late punch-ups on a train, there’s very little to cheer, but the story is interesting; spies impregnate a consignment of opium with radioactive material, and trace it to various distribution points to nail the chain. It’s a pre-French Connection policier, also known as The Opium Connection and Danger Goes Wild; fun to watch, if only to spot guest stars like Omar Sharif, Rita Hayworth, Yul Brynner and a scene-stealing Eli Wallach. 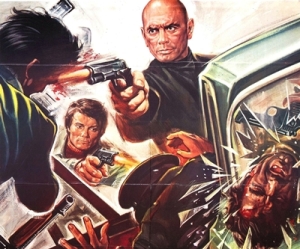 Yul Brynner was something of an unlikely star, but his performances in The King and I, The Magnificent Seven and Westworld made him a house-hold name. By 1976, he was dying of cancer, but still puts in a serviceable performance in Antonio Margheriti’s murky but effective thriller. Brynner is Peter Marcinia, a NYC hit man who re-enters the killing game to revenge the death of his brother. He travels to Naples where he tangles with both the local cops and the mafia, while finding time for romance with exotic dancer Barbara Bouchet, whose night-club routine gets quite a bit of screen-time. While nothing new in the genre of poliziotteschi, Death Rage has plenty of punch-ups and car chases, well-filmed and anchored by an unexpectedly touching performance from Brynner. There’s a weariness about his portrayal of Peter that makes Death Rage worth catching for genre fans; struggling to get himself into gear for one last job, there’s echoes of another 1976 elegy for a Hollywood star, Don Siegel’s The Shootist and John Wayne. 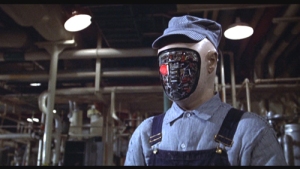 Although the much discussed remake of Westworld has travelled a much more high-brow road, the original has a special place in pop culture, notably taking Yul Brynner’s cowboy from The Magnificent Seven and repositioning him as a terminator-style robot, bent on hunting down two tourists (Richard Benjamin and James Brolin) in the futuristic Delos theme park. This sequel expands the Delos universe to reveal a plot for taking over the world with strategically placed robots, with Peter Fonda as the journalist uncovering the conspiracy. Blythe Danner provides colourful support, and there’s a surreal dream sequence in which she imagines herself romantically stalked by Brynner’s robot. Futureworld is a sloppier proposition than the original film, but certainly has its moment of surreal charm, not least for the early CGI, quite literally in the form of the hand of Pixar exec Ed Catmull.