Is there an element of the despised ‘white saviour’ trope in Hidden Figures, Theodore Melfi’s popular drama about the black women behind many of the key calculations of the US space programme in the 1960’s? Possibly; there’s certainly big name support for the girls from Kevin Costner, Jim Parsons and Glenn Powell. But Hidden Figures can only play what’s in front of it, and the story of Katherine Gobel Johnson (Taraj P Henson), Dorothy Vaughn (Octavia Spencer) and Mary Jackson (Janelle Moae) is inspiring enough to make such accusations churlish. The white characters are portrayed as well-meaning if rather insensitive; Hidden Figures has it’s focus firmly on the battles that the three women overcame on their own terms, and the help they got is only one factor in the equation. Spencer steals the show; her justification for stealing a library book tells you all you need to know about the film’s worldly attitude, and even if a few fictions creep in, Hidden Figures will make you wonder as to which other historical events are in need of having their credits reconsidered.

Spike Lee’s best film in a couple of decades is a true-life story that’s both weird and wonderful; the story of a black policemen who infiltrates the white enclave of the Klu Klux Klan, Lee’s film would be unbelievable if it didn’t happen to be based on a factual account by ex-cop Ron Stallworth. Played by John David Washington, Stallworth is tired of getting the wrong end of the stick at Colorado Springs Police Department and calls up the KKK membership drive. Stallworth needs a white face to complete his ruse, and Flip Zimmerman (Adam Driver) is prepared to be his other half. Once the men get close to the Grand Duke (Topher Grace), they discover a bomb plot that makes their cover story all the more risky. While Blackkklansman exaggerates Stallworth’s story for dramatic effect, Lee’s film is a gripping ride, with Washington and Driver both engaging, and the audience’s lack of knowledge about how the story concludes creating considerable tension. A final coda using sobering newsreel footage from Charlottesville hammers the message home, and Blackkklansman takes no prisoners in demonstrating how right-wing ideology can create moral danger. 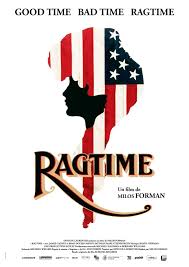 Milos Foreman’s 1981 drama is best remembered as the final film of screen legend James Cagney; he’s only on screen for a couple of memorable scenes, but this adaptation of El Doctorow’s historical novel has plenty of other points to recommend it. It’s the story of a black man, Coalhouse Walker Jr (Howard E Rollins Jr) whose wife and baby are taken in by a well-off white family. Coalhouse gets into a beef with a Fire Chief (Kenneth McMillian) that leads to a siege, with Police Chief Waldo attempting to resolve the matter. There’s small roles for Jeff Daniels, Samuel L Jackson, Mary Steenburgen, Donald O’Connor and more, and the sense of the 1900’s is pervasively caught. Ragtime was garlanded with Oscar nominations, but didn’t win; it’s not exactly a crowd-pleaser at 155 mins, but as a consideration of the darker side of American history, specifically racism, it’s an absorbing and powerful watch for grown-up audiences.

A sequel of sorts to both Those Magnificent Men in Their Flying Machines and The Great Race, or perhaps more identifiable as a precursor of popular children’s Tv animation Wacky Races, Monte Carlo or Bust is one of those glamorous sixties capers featuring a variety of stars, exotic international locations, dated humour and a few points of genuine interest. Also knows as Those Daring Young Men in Their Jaunty jalopies, Ken Annakin’s film features Tony Curtis, Peter Cook and Dudley Moore, Terry Thomas, Eric Sykes, Gert Frobe, Susan Hampshire and Bouvril (from After The Fox) as the competitors in a weird race in which the contestant travel from different corners of the world to Monte Carlo, where the race properly begins. Curtis looks a tad tired as a leading man, but Moore and Cook seem positively invigorated by their satire of British poshness, and their comedy due score plenty of big laughs in this lavish production.

Terence Fisher’s sense of style often seemed to be at odds with the cheeky cheap and cheerful production values of Hammer films; this retelling of the classic Mummy story has a garish colour scheme with dynamic greens and reds splashed across the screen. Peter Cushing is amongst the party of foolhardy Brits who happen across an Egyptian tomb; murdered one by one by a mysterious assailant, it’s clear that something evil has been awakened, and that something is a mummy played by Christopher Lee. The Mummy’s narrative is straightforward enough, but there’s a lengthy and substantial flashback that details the history of Kharis (Lee) giving the star a chance to do something more than swan around in bandages and moaning in a threatening way. There’s a sense of colonial guilt at work here; although John Banning (Cushing) describes the forces disturbed as ‘evil’, it’s clear that the wrong being committed here is the desecration of the temple, and a reincarnation sub-plot involving Banning’s daughter manages to create some genuine sympathy for the monster. Jimmy Sangster’s script may feed on fear of a foreign unknown, but doesn’t shy away from identifying a genuine grievance in terms of how the Egyptians might view entitled Brits.

Exploitation film are usually extreme; Africa Express is an odd fish because it’s an Italian rip-off of something, but it’s not clear what. Ursula Andress is Madeleine Cooper, an environmental campaigner who falls foul of big-game hunter William Hunter (Jack Palance). Disguised as a nun, she escapes from a train ambushed by Hunter’s men, and seeks help from a truck-driver (Guiliano Gemma) and his pet monkey (Bibi). This being 1975, Africans are relegated to bit parts in their own movies, and there’s periodic breaks for wild-life photography and a garishly upbeat score. If it wasn’t for the causal racism and goggle-eyed misogyny, Africa Express might be a good family film, which was presumably the intention. Instead, Michele Lopo’s film is something of a time-capsule of attitudes it was acceptable to have in the 1970’s. Andress does the best here, enjoying the chance to play a driven character while not eschewing a smidge of glamour. Another weird choice for streaming on Amazon Prime, this film might seem obscure, but it presumably made enough money to justify a sequel the following year, Safari Express. 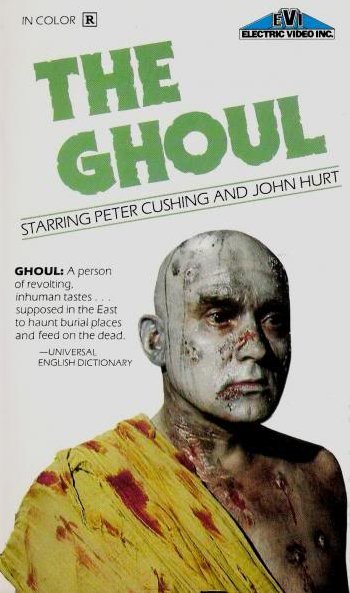 Back in the 1980’s, the BBC’s late night horror double bills on Saturdays used to pull in substantial ratings; a black and white primer followed by a full-on colour horror film from the 70’s. The Ghoul was one of the featured films, and pops up now on Amazon Prime like a wine that’s been wasting in the cellar for forty years. The second film of Tyburn Film productions, it reteams Hammer veteran director Freddie Francis and star Peter Cushing, but the attitude and method is quite different from the Kensington Gore methods of the British studio. Instead, The Ghoul mines a strangely esoteric brand of horror fiction, with allusions to India via Gwen Watford as Ayah, the housekeeper to Cushing’s retired minister Dr Lawrence. It’s implied that Lawrence’s son was converted to cannibalism during a trip to Asia, and when a foursome of 1920’s flappers break down during a London to Brighton road race, the son (Don Henderson) is out for blood and more. The Ghoul is a glacially slow horror film, and the pay-off (Henderson in a tunic) must be one of the least exciting ever. But Cushing and John Hurt as his servant Bill both strike sparks, and The Ghoul is a more literate film than it’s benighted reputation suggests.

The Film Authority
Create a free website or blog at WordPress.com.