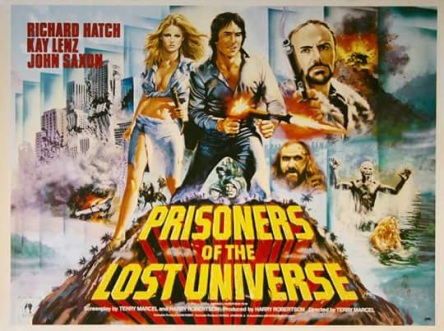 Terry Marcel is an unheralded figure, but his unique comic book sensibilities seemed probably out of step with both the 70’s and 80’s. He went from first and second AD on projects as diverse as Straw Dogs and Pink Panther films to taking the directorial reigns on cult classic Hawk the Slayer and comic-strip revival Jane and the Lost City. He’s got a certain swashbuckling style that was never matched by his budgets; together with producer and musical maestro Harry Robertson, they wrote the script for Prisoners of the Universe, a very 1982 project involving time-travelling portals; HG Wells’ The Time Machine, or at least George Pal’s version, seems to be a jumping-off point. And what a jump; Battlestar Galactica’s Richard Hatch is Dan, a man in a truck involved in a highway crash with Carrie (Kay Lenz) during a series of earth tremors. She visits the home of Dr Hartmann (Kenneth Hendel) a scientist who has constructed a portal to another dimension, and doesn’t see any reason by an earthquake might hinder his experiment, The three of them are transported a lost universe that looks exactly like a South African scrubland with some trees with paper plates attached, ruled with an iron fist by Kleel (John Saxon), who makes General Zod look like a social worker. There’s a giant who looks a lot like the late Greek singer Demis Roussos, talking geese, a midget thief and a number of the oddities which marked Hawk the Slayer, plus the kind of chat that grabs the attention; ‘This may only work on snakes who like music’ and ‘What am I supposed to do with a mad scientist for an hour?’ both rack up the points on the bad dialogue scoreboard in the first five minutes. Saxon, looking like Sean Connery’s stunt double and enjoying himself as usual, is something of a blast here, with plentiful catch-phrases and uncertain horse-manship; the actor had his fans in the US, but in the UK, John Saxon’s popularity dictates that his face appears on coins and stamps, and lucrative government grants are available to film theorists who can prove they’ve seen over fifty of his films. That’s not actually true, but it should be; meanwhile in a parallel universe that looks at lot like ours, Marcel’s daughter Rosie wrote the screenplay for Fifty Shades of Grey; fans of bad movie dialogue can connect the dots themselves.