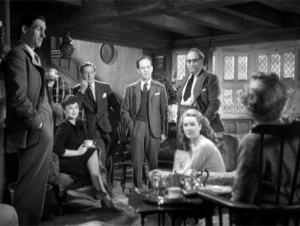 Horror in British cinema has a classy past; this influential portmanteau film from Ealing studios glides by like a Rolls Royce. Part of the charm is the directness; Dead of Night doesn’t use pop culture references or homage to other directors; the stories are raw, simple and effective. While the ghostly golfing tale is really just light relief, the opener, about a racing driver who has a premonition of his own death, is striking and shocking in all the right ways. Based on a 1906 short story by EF Benson, it sets the mood nicely for Alberto Cavalcanti’s chilling Christmas party and Robert Hamer’s haunted mirror, both of which have a strange poetry of their own. And if Cavalcanti’s final sequence is the most iconic, with Michael Redgrave as the ventriloquist who loses a battle of wits with his dummy, the wraparound story ties the whole package together perfectly, adding a strand of philosophical horror that pulls the meta-narrative together in a highly original way.