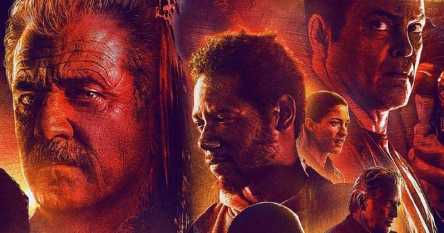 There’s a large section of the worldwide film-going audience who have no idea that S Craig Zahler exists. Bone Tomahawk, Riot in Cell Block 99 and Dragged Across Concrete all made an impact on critics and cult movie fans alike, but that mainstream breakthrough has proved elusive. But it will come; if you know anyone who claims to be bored with CGI, feels that modern films are not tough or realistic, and yearns for the days of Sam Peckinpah or Don Siegel, then advise them to buckle up, because S. Craig Zahler is going to be right up their alley. Dragged Across Concrete is a heist-gone-wrong movie that should leave viewers feeling as if they’ve been dragged across concrete; that 159 minute run-time is gruelling, but also exhilarating. Mel Gibson and Vince Vaughn are two cops who get suspended by boss Lt Calvert (Don Johnson) for police brutality. Ridgeman (Gibson) has financial difficulties, and an armoured car robbery is mooted as one way out of the hole. Meanwhile Henry Johns (Tory Kittles) exits the slammer to find a changed world; unwisely, he signs up to be part of Ridgeman’s crew. Although Dragged Across Concrete is deliberately slow, it locates most of the drama within the action of the heist itself, making the action absorbing and frequently painful to watch; Zahler is clearly fascinated by violence, but he’s alert to the moral decay around it, and links each character in a series of death-grips that extend to the final scene. Udo Kier, Thomas Kretschmann and Fred Melamed contribute some short but telling cameos, and the whole vibe has a bleak, early 70’s vibe. Dragged Across Concrete is a tough, nasty crime-story, a jet-black shot of urban mayhem that should thrill even the most jaded thrill-seeker.

After his sensational breakthrough in Mad Max, Hollywood struggled to find the right niche for Mel Gibson pre-Lethal Weapon. From Mrs Soffel to The Bounty, the fit wasn’t quite right, and Peter Weir’s The Year of Living Dangerously is probably his best performance from that period. Adapted from CJ Koch’s novel Gibson plays journalist  Guy Hamilton, who hooks up with diplomat (Sigourney Weaver) as president Sukarno takes a grip of Indonesian politics. Gibson and Weaver generate plenty of heat, while Linda Hunt steals the show as Guy’s cameraman pal Billy. Like most of Weir’s heroes, Guy is testing the limits of the world around him; like Truman in The Truman Show or Jack Aubrey in Master and Commander, he finds that his adventure is limited by the political world around him.