Something of a curiosity in the John le Carre stakes, this 1970 thriller gets quite a few elements right, notably the personnel at The Circus; George Smiley is dropped from the original book, but Anthony Hopkins, Sir Ralph Richardson and Paul Rogers all fit the bill as the crumpled espionage handlers with the power and life and death in their hands. The film’s centre is Leiser (Christopher Jones) a Polish defector who becaomes a pawn in international espionage games when he’s recruited to spy on East German missile sites. The first half of the film does well to suggest how and why Leiser accepts the offer, but things get a little simplistic once the mission begins, and a final bookend doesn’t quite work. Hopkins seems to have been none too impressed by Jones and his James Dean mannerisms, but it kind of works for the film that Leiser is so much of a fish out of water. The Looking Glass War feels like a compromised efffort, but with a script by le Carre himself, it springs to life whenever Hopkins and Richardson are on screeen, and Frank Pierson, director of the 1976 A Star Is Born, creates some striking compositions.

There’s an illustrious history of John le Carre’ adaptations, and this six hour BBC entry in the cycle has the blessing of the spy-master himself, who even provides a cameo for the writer. The first hour is all slow burn as Tom Hiddletone’s hotel manager Jonathan Pine gets a whiff of the danger posed by Hugh Laurie’s billionaire Richard Roper and his entourage. But a stunning plot-jump moves the action on at great pace, as Pine suddenly becomes part of Roper’s gang after rescuing his son, and works his way deep into the businessman’s empire, encouraged by UK intelligence in the form of Olivia Coleman. If the recent film of le Carre’s Tinker Tailor, Soldier, Spy felt like a crash course in espionage, The Night Manager offers a careful, granular approach to detail that matches the original prose. The Night Manager is intense, sexy and compelling tv that’s just as good as any recent cinema spy-game. 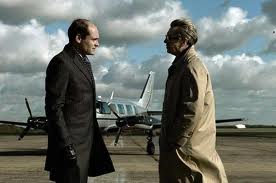 John le Carre’s spy novels are something of an institution in the UK, where the television series featuring Alec Guinness as George Smiley are a cultural cornerstone. Thomas Alfredson (Let The Right One In) was a surprising choice to helm this reboot of the Smiley franchise, but he pulls off the dingy British 70’s feel with style. Gary Oldman plays Smiley, with John Hurt as his boss (Control) and Colin Firth, Tom Hardy, Benedict Cumberbatch, Mark Strong, Stephen Graham and Toby Stephens amongst the agents who may, or may not, be in the pocket of Smiley’s Russian counterpart Karla. Tinker Tailor Soldier Spy packs a complex, nuanced narrative into a dense two hours of crosses and double crosses, but there’s a wry humour about Alfredson’s view of the game; using music as diverse as George Formby’s Mr Wu’s a Window Cleaner Now, Dana’s All Kinds of Everything and a triumphant live recording of La Mer by Julio Iglesias, he scores Smiley’s investigation with surprising counterpoints, and creates a text worth repeated viewings, even if the action rarely rises above covert conversations.

John Le Carre’s super-spy George Smiley gets a second outing after The Spy Who Came In From The Cold, but gets rechristened as Charles Dobbs due to copyright complications in Sidney Lumet’s film. Played by James Mason, Dobbs puts aside his marital discord with Ann (Harriet Andersson)  to investigate the apparent suicide of a government employee. Dobbs questions Elsa (Simon Signoret) with the help of Inspector Mendel (Harry Andrews), but she doesn’t give much away, and the reappearance of Dobb’s old espionage mate Dieter (Maximilian Schell) suggests the problem is close to home. Although the names may have been changed, Lumet’s film nails the drab surroundings and elliptical dialogue for the future George Smiley adaptations, although the funky Quincy Jones score is a bit groovier than the sophisticated story-telling requires.