Malcolm McDowell takes the lead in this period romp from Richard Lester, based on the Flashman books by the late George MacDonald Fraser. A period James Bond with cowardly tendencies, Flashman is enlisted by Bismarck (Oliver Reed) into impersonating a Prussian dignitary, but Flashman soon finds himself over his head in European intrigue. As well as a sexy turn from Florida Ballkan, Royal Flash offers an array of great supporting work from Alastair Sim, Alan Bates, Tom Bell, Joss Ackland, Britt Ekland and a tiny role for the late Bob Hoskins as a police officer. The mix of slapstick violence, fake patriotism and espionage doesn’t quite gel, but Royal Flash is worth seeing for its cheerful irreverence and lavish period detail. 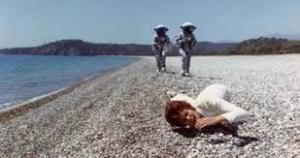 A strange Euro-thriller from the mid-70’s, Footprints on the Moon is a bizarre mystery, with Alice Crespi (Florida Balkan) slipping between several realities. In one, she’s on the moon with some astronauts, in another, she’s investigating a strange town where everyone seems to know her. Novelist Mario Fanelli worked with director Luigi Bazzoni to create a disconcerting atmosphere, constantly begging questions about Alice’s grip on reality. Small parts from Lila Kredova and Klaus Kinski add to the general confusion, but Footprints On The Moon is a diversion worth exploring for mystery fans.