Releasing a kidnapping drama at the time of the kidnapping of Italian Prime Minister Aldo Moro probably didn’t help the prospects of Fernando Di Leo’s thriller, but decades later, it’s a superior Poliziottesch with a number of unique elements. Original title Rome Calibre 9 indicates a follow-up of sorts to Milan Calibre 9 was intended; Claudio Cassinelli takes the lead as Guido, who comes out of jail and faces up to a crime boss Rizzo (US import Martin Balsam) who he believes killed his girlfriend as the left the prison. There’s also romance in the form of Barbara Bouchet as his previous squeeze Lisa, and Pier Paul Capponi does a nice job as Rizzo’s henchman, who has a consistent line in one-liners; he insists that Guido ‘conforms’ at every opportunity. The usual great music, wallpaper and detail from Di Leo, but it’s Cassinelli’s work as Guido that really stands out; baleful and brooding, he’s a compelling leading man in a tight little tale of diamonds and intrigue.

Even if the central premise is straight from George Roy Hill’s The Sting, Fernando Di Leo’s Eurotrash thriller has so much else going on that it’s pointless to complain. The Italian director has oodles of style, and the fashions, wallpaper and charismatic performances do plenty to keep things fun to watch. Con artist  Nick Hezard (Luc Merenda) is set up by Robert Turner (Lee J Cobb), an American gangster, as the fall guy for an insurance job. Nick doesn’t take it lying down; he engages a small army of friends and associates in an elaborate heist aimed at stealing Turner’s money and destroying his reputation.  The sting itself is quite ingenious, and the locations (mostly Geneva) add a unique flavour. Merenda looks great as Nick, with a range of substantial roll-neck sweaters to boot, and most of the cast make an impression, including William Berger and Dagmar Lassander. A couple of violent scenes are at odds with the jovial atmosphere, but that’s 1976 for you; appealing to an adult audience, Nick The Sting makes light of crime, and given the woes of Italy at the time, that’s no mean feat.

The presence of genial star Maurizio Merli is always reason enough to watch a film; despite his tragically young age at time of death (49), Merli left behind a selection of ass-kicking Italian police thrillers which are always worth a watch. Working with the great Fernando Di Leo, From Corleone to Brooklyn fuses The Godfather with The Gauntlet as Berni (Merli) a tough cop from Italy escorts a key witness to NYC to testify against a mob boss.  Van Johnson is the New York Lieutenant who is hoping to bring Berni in, and Biagio Pelligra is awesome as an unpredicatble stool-pigeon. Under Berni’s wing. Di Leo’s plotting is sharp, his selection of background wall-paper is  as visually impeccable as always, and Merli is positivelt radiant at the film’s centre. Immaculately dressed and coiffeired, Merli merrily bitch-slapps his way through the Mafia like a dose of salts; if you’ve never seen this great leading man before, this is one special cop you have to see in action. If you’re new to the world of Poliziotteschi, then this Amazon Prime entry is an ideal introduction 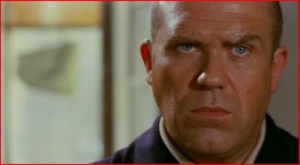 A kick-ass slice of thick-ear gangster coolness, Fernando Di Leo’s 1972 film is a cleverly plotted crime-flick that turns clichés on their ear, right up to an amazing double-twist ending. The Godfather’s Gastone Moschin is Ugo, a big man in a small car, who gets out of jail with both the cops and his criminal counterparts keen to get their hands on the stolen money that put him in the clink in the first place. Ugo hooks up with Nelly (Barbara Bouchet) for a bit of respite, but the attentions of the Commissioner (Frank Wolff) and crime-boss Rocco (Mario Adorf) leave Ugo with little room for manoeuvre. Using street-actors and real Milan locations, Di Leo offers up an urgent slice of police melodramas, with nail-bombs, torture and punch-ups in spades, with Adorf’s crazy behaviour nicely matched by Moscin’s taciturn performance; if any film could revive Jason Stratham’s career, a remake of this would fit the bill nicely.