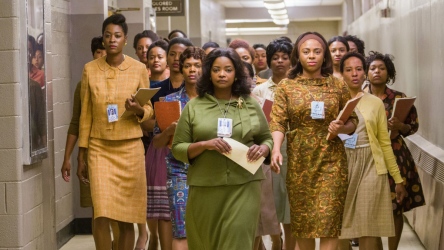 Is there an element of the despised ‘white saviour’ trope in Hidden Figures, Theodore Melfi’s popular drama about the black women behind many of the key calculations of the US space programme in the 1960’s? Possibly; there’s certainly big name support for the girls from Kevin Costner, Jim Parsons and Glenn Powell. But Hidden Figures can only play what’s in front of it, and the story of Katherine Gobel Johnson (Taraj P Henson), Dorothy Vaughn (Octavia Spencer) and Mary Jackson (Janelle Moae) is inspiring enough to make such accusations churlish. The white characters are portrayed as well-meaning if rather insensitive; Hidden Figures has it’s focus firmly on the battles that the three women overcame on their own terms, and the help they got is only one factor in the equation. Spencer steals the show; her justification for stealing a library book tells you all you need to know about the film’s worldly attitude, and even if a few fictions creep in, Hidden Figures will make you wonder as to which other historical events are in need of having their credits reconsidered. 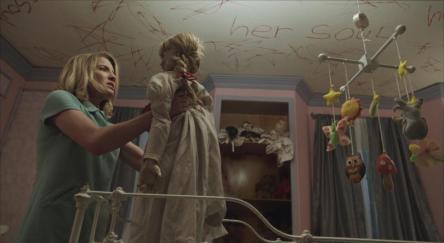 John R Leonetti’s prequel to James Wan’s The Conjuring has a tricky remit to fulfil; it’s the backstory for Annabelle, the possessed doll. With a late sixties setting, Annabelle the movie initially picks up on a Charles Manson serial killer whose spirit escapes from his body at the moment of death and survives in the doll. It’s hard to believe that Mia (Annabelle Wallis) and John (Ward Horton) would feel like hanging on to the creepy-looking toy, but their slow realisation of it’s power makes up the body of the film. The shocks are fairly rote, but Annabelle builds to one excellent extended set piece involving a lift and a darkened basement that captures the tone of a real nightmare. If the rest of the film was so carefully constructed, Annabelle would be a horror classic; it’s worth seeing for that ten minute sequence alone.

So many films depict a meteoric rise in pop culture success, with the posting of a song or clip on You Tube as a short fuse to fame; The Coen Brothers focus instead on a more honest depiction of the trials of an artist, singer-songwriter Llewyn Davis (Oscar Isaac), who wanders around Greenwich Village in the early sixties, playing session tracks and minor gigs, unaware that Bob Dylan is about to eclipse his minor successes. The Coens throw in a gallery of memorable minor characters, from John Goodman’s drug-addled musician to F Murray Abraham’s weary producer, and Justin Timberlake has a funny song spoofing folk music responses to the space programme. But Isaac makes the film, his soulful, self-destructive character a rare example of a character so true to life it’s almost painful to watch. Almost, because the Coens could find providence in the fall of a sparrow, and make Llewyn a compelling anti-hero.

Robert Parrish is something of an unsung hero of off-beat movie making, with Doppleganger aka Journey to the Far Side of the Sun amongst his other films. Working from a script by writers including a pre-Performance Donald Cammell, his caper film Duffy is an odd bird, starting slowly as Parrish establishes the country-house lifestyle inhabited by wealthy Charles Calvert (James Mason) and his family, including his son, James Fox’s dissolute, cravat-wearing toff Stefane. The action shifts to the Mediterranean where Duffy (James Coburn) a sculptor is enlisted in a plan to hi-jack a yacht, but Duffy has his own ideas about how the heist should be conducted. Marking something of a clash between traditional crime movies and hipster deconstruction, Duffy is a pleasurable wallow in late sixties ennui, with Coburn having fun in what he described as his own favourite amongst his roles.

Arriving some ten years after the hippie culture it celebrates died off, Milos Foreman’s follow-up to One Flew Over The Cuckoo’s Nest brings a welcome dose of Eastern European surrealism to the Broadway musical, from the dancing police horses in the opening scene. The drama of a soldier (John Savage) who falls under the wing of Dionysian wanderer called Mr Burger (Treat Williams). Songs like Aquarius and Good Morning Sunshine are all staged with verve, and even if the original writers disapproved, Hair is a lively example of Forman’s versatility, and a showcase for the charisma of Williams, whose uproarious performance of I Got Life, accompanied by a plate-smashing revolt at a posh dinner party, captures the rebellious spirit of the sixties with elan. 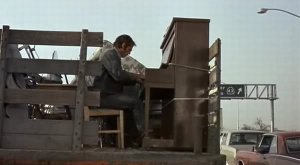 One of the less heralded items of Jack Nicholson’s celebrated 70’s career, Bob Rafelson’s freewheeling 1970 film sees the star in top form as non-conformist drifter Robert Dupea, who shuffles from one job to another while squandering his gift for playing the piano. One memorable scene sees Dupea getting out of a car in the back of a traffic jam and playing a piano loaded onto the back of a flatbed truck for the entertainment of his fellow motorists. Five Easy Pieces settles down when Dupea comes home and his family have their say about his lifestyle; it’s clear that Dupea’s intelligence and gifts are likely to be unrealized by his low-life lifestyle, but it’s also clear that he’s running from the responsibilities of an well-heeled family he find hard to love. A small-scale work, Five Easy Pieces now has an honest, uncontrived characters that makes it far less dated than the modish Easy Rider.