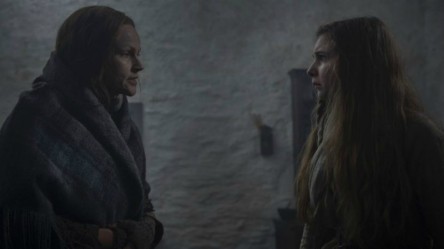 Comparisons to Rober Egger’s The Witch are inevitable for Gwen, an effective little indie film about a young girl’s hard-scrabble existence in the desolate mining areas of North Wales. That’s not ideal given that William McGregor’s drama is hardly a conventional horror film, although there are strong supernatural elements. Like The Witch, it’s a slow burn that gets to a fever pitch in the last act, but it’s notably different in that the pay-off is a different kind of horror from most supernatural genre fare.

The big draw here is Maxine Peake, who has a substantial reputation as one of today’s best performers; her Hamlet was certainly as good as any man’s. She plays Elen, a young mother whose ageing rapidly as the difficulties of raising her family increase. Elen’s single-mother existence is complicated by her difficult relationship with her daughter Gwen (Eleanor Wothington Cox), who lacks her mother’s fiery temper. Elen responds instinctively and protectively, sometimes violently, and is nursing a potentially life-threatening illness. And the very land that Elen and Gwen live on hides a secret that makes their situation all the more precarious.

William Oldroy’s 2016 film Lady Macbeth might be a better point of comparison; this is a well-acted, visually austere drama in which the central theme is man’s inhumanity to man. Elen’s supernatural beliefs are very old-school, but Gwen’s investigations of the world around her seem to back up many of her mother’s fears, irrational or not. The cost and difficulty of sourcing medicine to treat her mother makes for a depressing spiral of events, but Gwen, the film and the character, never stops for pathos or contrivance; McGregor maintains a hard edge throughout.

Gwen just about fits in on the fringes of the growing ‘folk horror’ genre, but don’t be expecting devils, demons and talking goats. There are jump-scares, however, and a feeling of dread and foreboding that’s justified in the final scenes. And McGregor also does well with a cast who are not overshadowed by Peake’s powerhouse performance; Gwen transcends genre expectations to offer a potent, difficult but rewardingly tough drama.