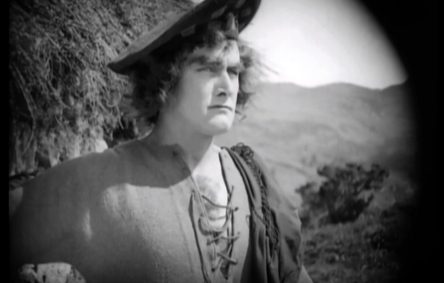 There’s more chance of getting funding for a bridge over the Atlantic than Scots getting funding for a film about Scottish history; ‘that’s a job for outside talents’ has been the message from successive governments. Back in 1922, things were more up for grabs than might be expected, and this home-grown version of Rob Roy is surprisingly direct in depicting a ordinary Scot in class conflict with his aristocratic betters.

The opening titles are keen to emphasise that this isn’t yo mamma’s Rob Roy, or at least, not Sir Walter Scott’s; the intertitles also disarmingly point out that parts of the Rob Roy legend have been embellished to create a good story. But William P Kellino’s film is rather modern in structure, comparable to 2018’s Irish hit Black 47 in the way it shows how the downtrodden might coalesce around a rebel with a cause. That’s Rob Roy (David Hawthorne), who foolishly signs a deal with the Duke of Montrose (Simeon Stuart) and finds his community decimated in his absence. Rob Roy vows to get justice, even if he has to come back from the grave to do so; part of the fun is exactly how Rob Roy’s plan plays out. And there’s also sophistication in the way that Rob Roy’s own motives are depicted; he’s saved from certain death, not by brute strength, but because of previous kindnesses; this Rob Roy doesn’t gain his strength from patriotism, but from humanity.

Other critics have noted Hawthorne’s similarity to John Cleese; there’s certainly a hint of Ewan McTeagle about his appearance, wandering the glens with an enormous hat and huge furry eyebrows. Time has also added lustre to the supporting cast; Scots singer and film-maker Richard Jobson also appears to have a doppelganger here, as does Steve Coogan. And there’s a gallery of funny supporting turns, including Tom Morris as Sandy the Biter and Alec Hunter as The Dougal Creature.

If you’ve tried and failed to enjoy silent film on You Tube, it’s often because the worst possible prints end up there; this recut version of Rob Roy is currently touring in Scotland, with a soundtrack by David Allison that mines the emotion from the images. This is no twee piano accompaniment, but a rigorous application of traditional motifs delivered in a way that’s strikingly modern, with squalling guitars for the battle-scenes and lilting melodies for the romance and the dancing. If nothing else, the use of real locations is extraordinary, from the hills and glens, complete with dogs, sheep and highland cows, to Stirling Castle itself.

For anyone interested in Scotland, film-making or just a good old slice of traditional storytelling, Rob Roy is something of a treat; they literally do not make them like this anymore, at least in Scotland they don’t.