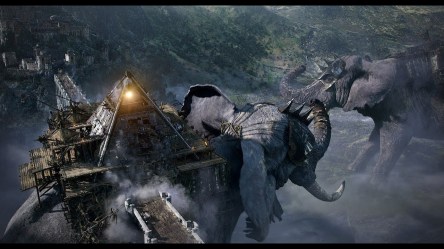 Guy Ritchie made his name with geezer gangster movies which dated quickly; there’s not much to be said for his take on The Man from Uncle or Aladdin other than he does a workman-like job. But give him $175 million and carte blanche to indulge himself and you get King Arthur: Legend of the Sword, a steaming tower of excrement that’s so monumentally bad it’s pretty much a must see movie. Charlie Hunnam is King Arthur, introduced fighting some giant creature out of a Godzilla movie. His opponent is his Uncle Vortigen, played by Jude Law. Vortigen has a castle under which he keeps a three-headed woman who also appears to be an octopus, and which he summons for advice by ringing a little bell. Sound ridiculous? Throw in David Beckham with his Minnie Mouse-on-helium voice as a bystander as Arthur pulls a sword from the stone, and chuck in some Oceans 11 heist scenes too. King Arthur lost a fortune at the box office and deservedly so; watching it is a car-crash of enjoyable hubris, smashing down to earth in a dollop of half-finished CGI.